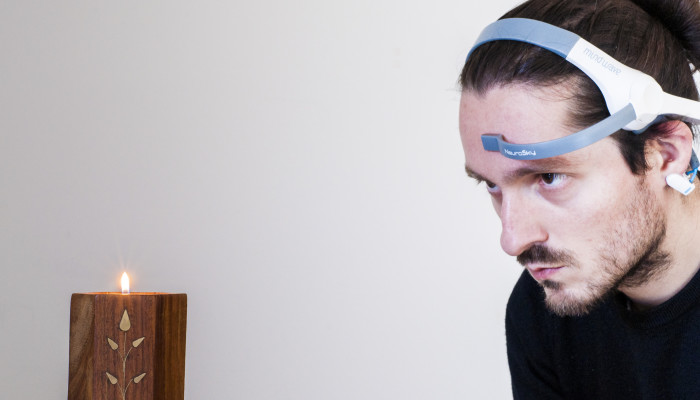 Trāṭaka is an interactive installation based on a brain-computer interface.

Trāṭaka is a Sanskrit term which means “to look” or “to gaze” and it refers to a meditation technique. This practice consists in concentrate the attention in a small object, or more commonly in a flame. In meditation, this technique is used to stimulate the ājňā chakra: a point located in correspondence of the brain. According to the Hindu tradition, this chakra is one of the six main centers of vital energy, and it is considered as the eye of the intuition and the intellect.

This installation is composed by a brain-computer interface that detect the brain waves and defines parameters like the level of attention. Wearing this device, the user is invited to concentrate his attention on a flame placed in front of him. The level of attention detected by this system, controls an air flow located under the flame: higher level corresponds with a more intense air flow. The interaction process aims to the user engagement for increase his attention in order to put the flame out. This will happen when the highest level of attention is reached: the air flow become strong enough to extinguish the flame.