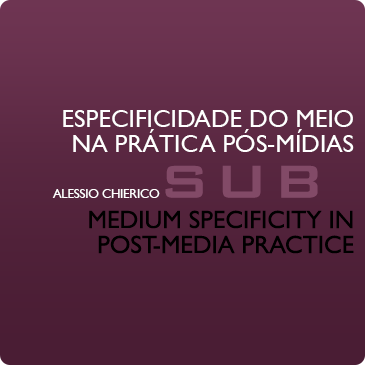 On line the issue “Radical Moderns” of V!RUS journal with my paper “Medium Specificity in Post-Media Practice“, available in English and Portuguese.

In art theory, the artistic media have been in the center of the discussion between Clement Greenberg and Rosalind Krauss, and functional to the definition of Modern and Post-Modern Art. This debate, together with the etymological ambiguity of the term ‘medium’, alimented a certain confusion about the relation between media and art. This issue influenced the criticism toward several artistic approaches, especially New Media Art. Essentially, it provoked a common rejection, from the contemporary art field, of the researches that aims to reflect about media, intended in general sense. This paper aims to highlight and clarify this issue, speculating about its possible origins, and taking into account the perspectives exposed by several theoreticians of art and media. In conclusion, acknowledging this condition, it has been proposed a theoretical framework that accommodates both Modern and Post-Modern perspectives: an enquiry of media with post-media practice.